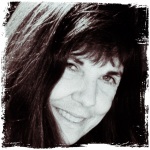 Mary Jane Roberts has won awards for her plays, poetry and short stories from such diverse organizations as the National League of American Pen Women, the City of Los Angeles, and Charlotte Repertory Company. Eight of her plays have been produced in Los Angeles and other parts of the country, and her short stories and poems have appeared in literary magazines and anthologies including Crosscurrents’ Literary Prizewinner’s Issue and the anthology Literary Olympians II.  Her poetry collection Sound of No Sound was published in 2012 and her short story “Stick Figures “ will soon be published in Persimmon Tree.

Every iota of written and visual work appearing on BRICKrhetoric belongs solely and entirely to the artist that produced it. No portion of this website, for any reason, by anyone, at any time, or place, FOR ANY REASON, may be copied or reproduced without prior written consent.

To Contact an Author/Artist:
Those wishing to contact an author/artist for the purpose of obtaining consent to use their work and/or inquire further about their craft may email the Editor: editor [at] BRICKrhetoric [dot] org